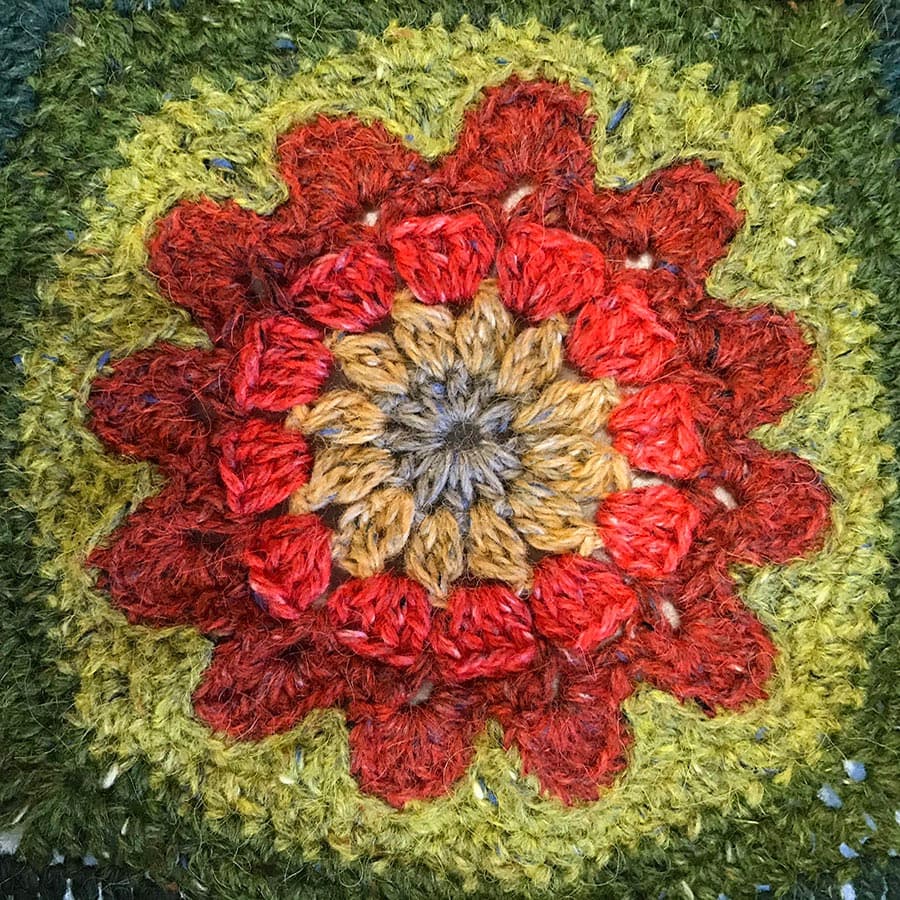 Homage to the (Granny) Square

“Perhaps creativity’s greatest mercy is this: By completely absorbing our attention for a short and magical spell, it can relieve us temporarily from the dreadful burden of being who we are. Best of all, at the end of your creative adventure, you have a souvenir—something that you made, something to remind you forever of your brief but transformative encounter with inspiration”
― Elizabeth Gilbert, Big Magic: Creative Living Beyond Fear

How many of us imagine a different, more creative life?

How  many people are so caught up in the ties of responsibility that the idea of creating something amazing will only ever be a daydream…..or  at best a ‘one day when…..’ scenario.

We all lead extremely busy lives. Lives that don’t lend themselves to spending even one day in a painting studio. (Oh – the luxury of even having a studio!) So if you find yourself justifying your creative inactivity with excuses about time, space, finances and a whole host of other stuff – keep this in mind;

OK – so I’m not suggesting we should all aspire to be a future ‘great master’ – (and actually even that description sounds very out dated and patriarchal these days)  but if you have that creative urge you really do have a duty to act on it – for your own wellbeing and metal health. In my own experience constantly feeling guilty for not acting on those creative urges results in Netflix binge watching, navel gazing and general self loathing.

I genuinely believe that however busy our lives are there are always some, barely visible, pockets of time that can be put to better use. The key is to locate those moments between the big things in your life. If you can spare 15 minutes a day to scroll through your social media feed, then you can find a few minutes to make one small, exquisitely perfect thing. Like a crochet granny square. (and you’ll feel much happier afterwards)

Crochet is how I choose to manifest my ideas at this moment in my life. It allows me to make small beautiful colour interactions in those brief 15 minutes I catch in the mornings before the children wake, or as I wait for a pot of potatoes to boil. In 15 minutes I can make a 4 inch square of beauty and lose myself in it. That makes me happy.

And the next day I can make another.

Until eventually I’ll have a collection of the most wonderful, colourful content for a bigger, even more beautiful, finished, work of art. 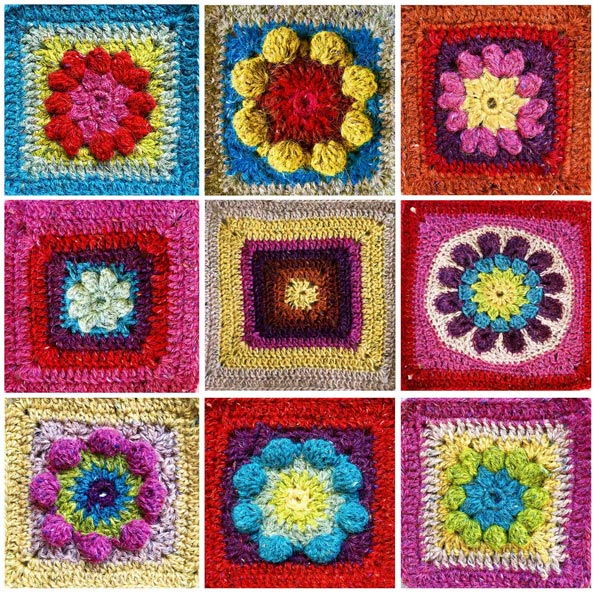 It’s as simple as that- and you can do it. There’s no big scary blank canvas. No declaration of intention or preparation of resources.

Just sit down, with a hook and some yarn and quietly begin working on the most amazing thing you’ve ever created.

Don’t even tell anyone what you’re doing, you don’t need anyone else’s approval, or permission. This is a conversation between you – and your creative soul.

My latest project; Homage to the (Granny) Square fits this model. It’s a way of working that’s playful, intuitive and achievable by anyone with an ounce of  curiosity, and it pays homage to the artist Joseph Albers and his lifetimes work on the interaction of colour.

Joseph Albers was one of the most influential artists of the 20th century who began his creative life as a crafts man, working with coloured glass; an early indication of his love of colour and optical effects. He saw the craft of stained glass as both a functional medium and as an art form.

Albers worked at the Bauhaus school where he taught glass work and furniture design and later after the closure of the Bauhaus moved to the United States where he became head of painting at  Black Mountain College in North Carolina, and later at Yale University. His students included Robert Rauschenberg, Cy Twombly, Eva Hesse and many other iconic 20th century artists.

In  1949, at the age of 62,  he began painting what was to become over 2000 works of art entitled Homage to the Square and he spent the rest of his life exploring the ‘relativity’ of colour.

These small compositions of squares within squares create unique colour interactions and  provoke different visual effects. He observed how the squares appeared to change according to the colours they were next to; they appeared sometimes brighter, bigger, smaller, static, moving or heavy and in his seminal thesis INTERACTION OF COLOUR he described how colours have their own inherent logic. 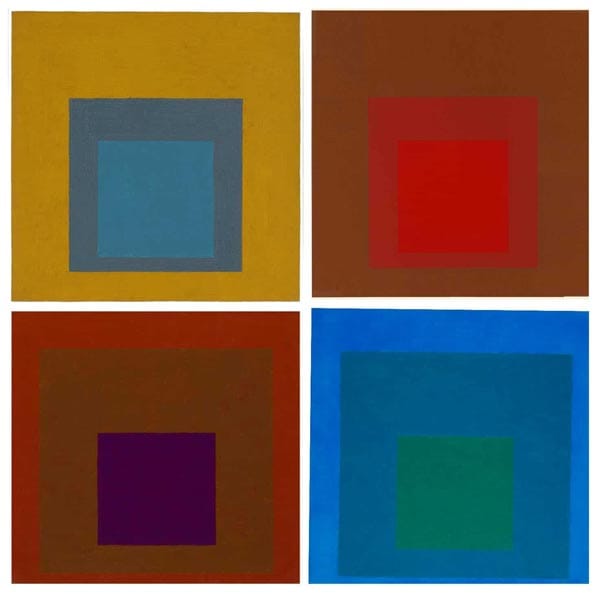 When you really understand that each color is changed by a changed environment, you eventually find that you have learned about life as well as about color.”

The square was chosen by Albers as a motif for it’s mathematical simplicity and because it has no specific symbolism. It is the most extreme reduction of form, doesn’t feature in nature and therefore can’t be interpreted as representational on any level. (although he later conceded that actually some crystals do form as cubes)

Albers work was an exploration of colour and altered perceptions of colours, but it also highlights the precarious and inconsistent nature of human perception.

“In my color book there is no new theory of color. But, in it, there is a way to learn to see.”

So….the square; chosen for its simplicity of execution and  absence of symbolism and unnecessary ornamentation.

As an artist, Albers sits in a precarious place. As one of the most important artists in the 2oth century he occupies similar territory to numerous other important modernist male painters. And all the other artists who followed with their educated opinions on aesthetics and the decorative.

His work, however, is rooted in his early years as a craftsman exploring the relationship between function and aesthetics and I am always interested to discover what leads an artist, or crafts person down a specific chosen path.

I like things to be functional. I like things to have a practical purpose in life and I believe in the principle that form follows function. I hate trinkets and unnecessary ornamentation but I love pattern and colour. I have a fear and loathing of the monumental in art preferring careful and respectful use of materials. That’s why I do what I do. I like to make beautiful things that also perform a function.

My Homage to the (Granny) Square project is not intended to be a parody of Albers work, or a commentary on ‘womens work’. It is simply an exploration of colour and colour interaction fuelled by curiosity and the impulse to make. The format is  flexible allowing anyone to use it as the point of departure for a uniquely beautiful, functional, work of art. 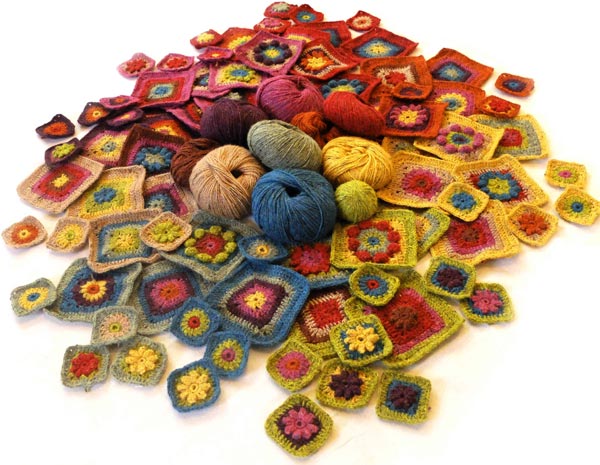 The blanket is made using 10 colours of Rowan Felted Tweed yarn; colours carefully chosen for their relationships with each other, and the squares are 3 different sizes, again, each having a relationship with the others.

Every square is different. Each one is carefully considered ( I decided against using random colour arrangements), and some I like more than others. But what’s important to me is that each square has its own unique characteristic and it is unlikely that this blanket will ever be reproduced in exactly the same way.

The course is aimed at anyone with basic crochet skills who would like a framework to create in, and the freedom to express themselves in colour. 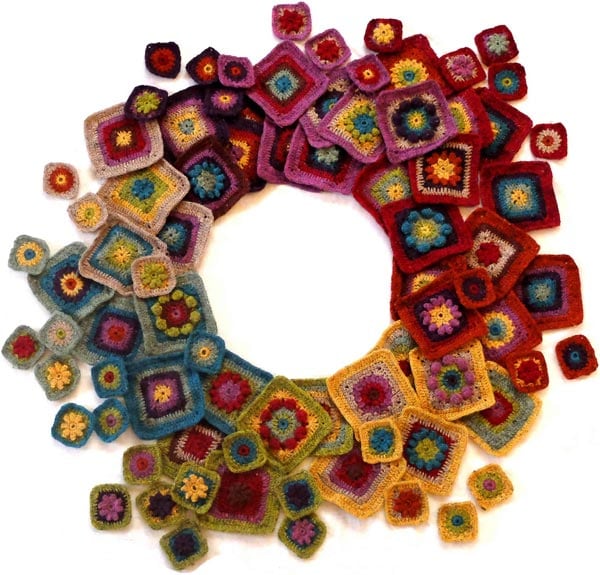 So why not invest in those hidden moments of time and join me this year to create your own Homage to the (Granny) Square?