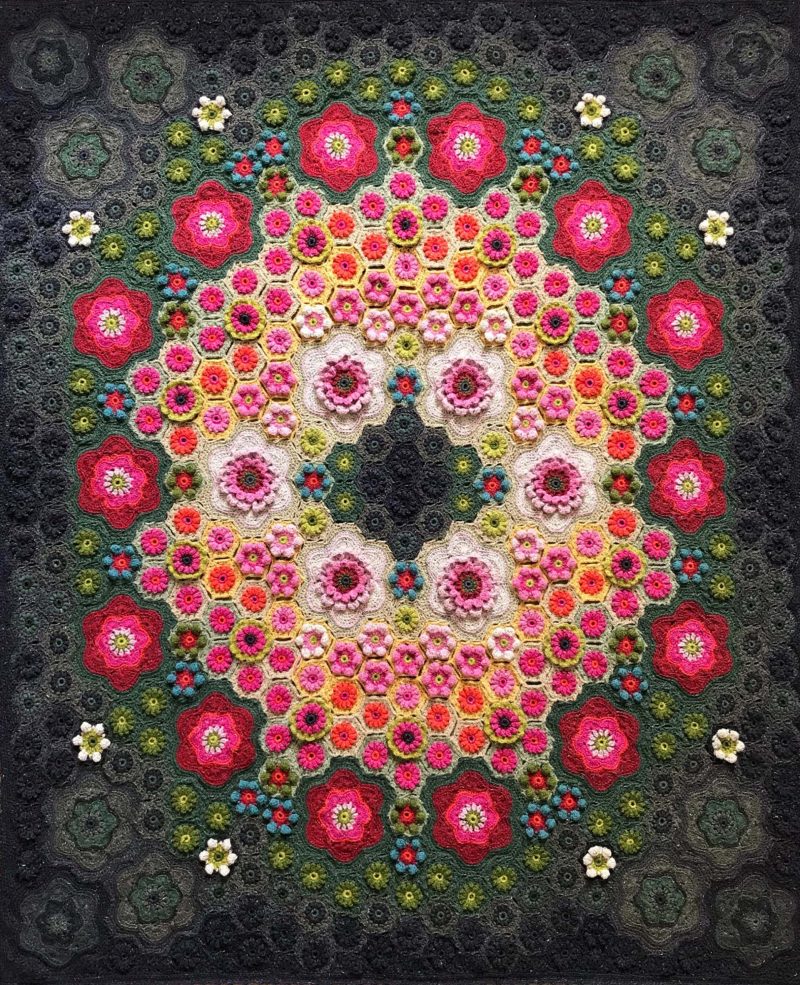 Wallflowers: The Tale of a Mystery Crochet Blanket

In November 2018 I’d just finished working on my first real life Homage course. It had been great fun. The results were beautiful and the inevitable question was;

I had no idea, but I knew that there had to be a next project- another blanket, bigger, more ambitious and…..and what? I didn’t know.

What have I just agreed to?

I gave myself a couple of months to prepare. I wanted it to be dramatic, complex, 3 dimensional and floral. I wanted to capture the drama and beauty of moody Dutch Masters still life paintings. At the time, in 2018, I had a fascination with the work of Rachel Ruysch – whose still life flower paintings have recently become hugely popular on Instagram. 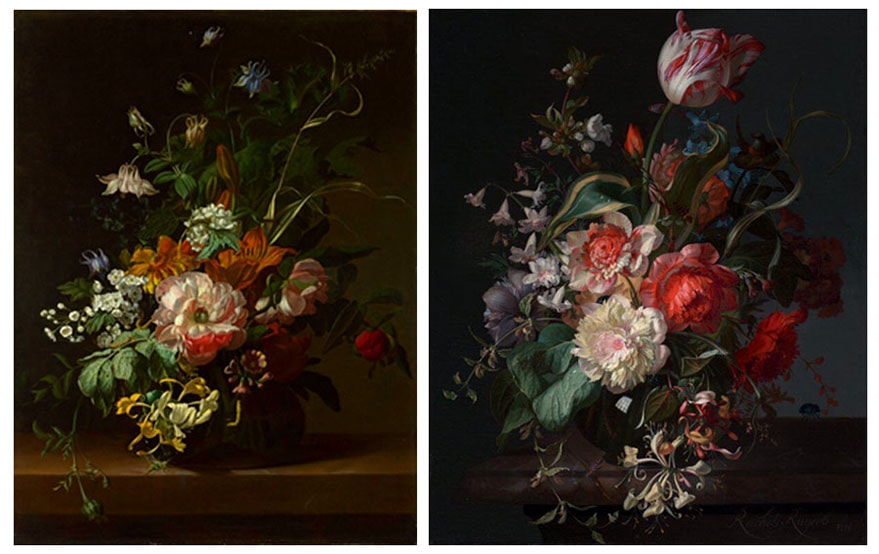 It’s always the contrasts that attract me to an image. The incongruous pairings of opposites. Light and dark/ masculine and feminine/ hard and soft; and I felt excited at the idea of combining the strict geometry of hexagon shapes with the softer, prettier forms of flowers in a new design. This was a challenge I wanted to rise to.

I began playing with photographs of conventional still life painting, exploring mirror repeats and became absorbed in the strange otherworldly patterns that were generated. 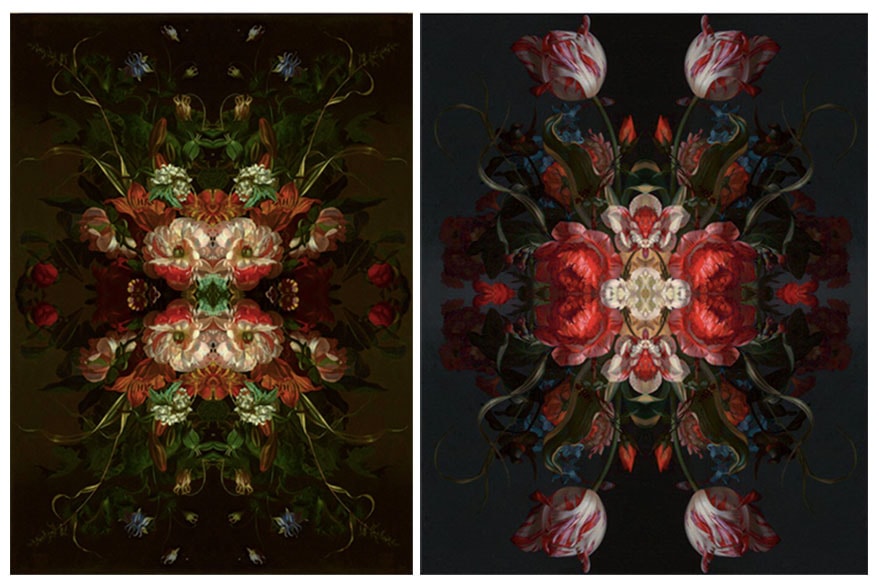 Later, as I started to explore crochet motifs I continued to experiment with this playful approach to creating pattern ideas.

There’s something about pattern repetition that I find completely absorbing. The human brain seeks out pattern everywhere – in behaviour and habit, in the visual, in music; we’re preprogramed to look for meaning in repetition and the familiar. Looking for, and interpreting pattern is integral to how humans learn and experience to the world. 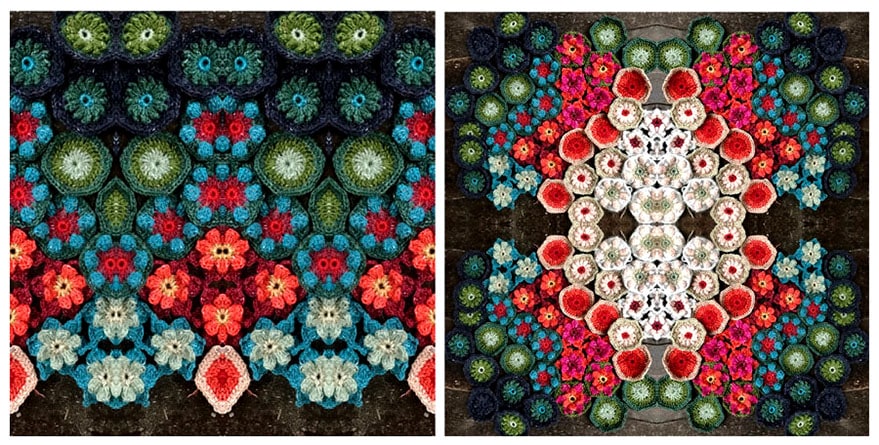 Two weeks before I was due to start teaching my new ‘mystery blanket’ course I had a vague plan and a rough sketch, and somehow I managed to complete the first step and write up the pattern in time for my first class.

My lovely group of ‘pioneers’ (aka ‘the guineapigs’) looked a little puzzled by the odd shaped hexagonal bits of crochet I presented as STEP 1. But- being lovely people, and very polite, and having committed to the project, there was no going back. They accepted the challenge with good grace, chose their colours in a joyful bun fight and left to make a start on their own odd shaped hexagonal bits of crochet. 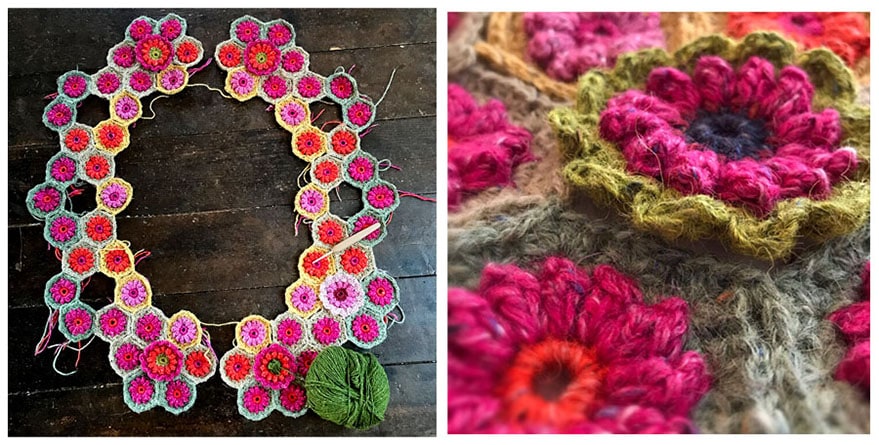 After which, I had exactly 4 weeks to plan, sample, make and write the pattern for step 2, which I managed to do. In the next workshop the developments were received graciously again, and with growing intrigue and enthusiasm as the motifs began to take on more 3 dimensional shapes.

Step 3 was the biggest challenge as the motifs grew in scale and became more complex and this next step was met with enthusiasm and excitement. I began to feel the project was gaining momentum and I was allowing myself to believe that this might actually work. 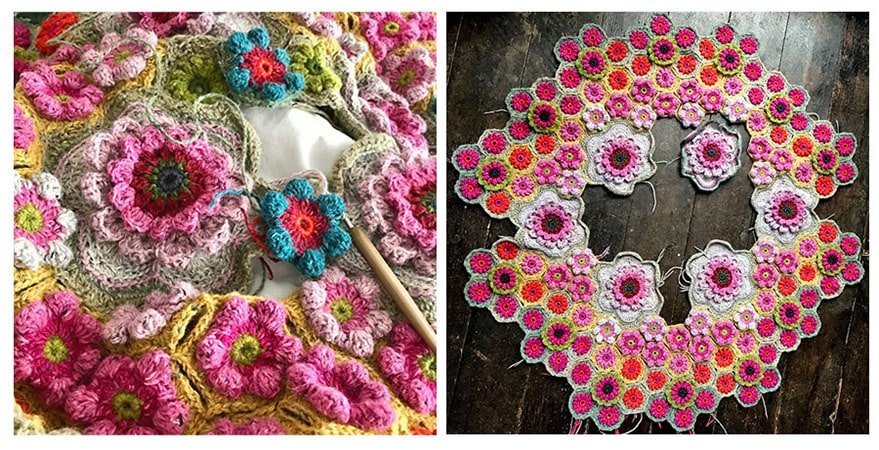 And so the project continued like this each month for six months. Each time we met we all celebrated everyone’s progress and I revealed the next step – which was always the result of a hair raising month of experimentation, inspiration, procrastination and panic.

Each month the volume of crochet increased in direct relation to my enthusiasm and joy and by the end of the project I was referring to my beautiful blanket as The Beast. 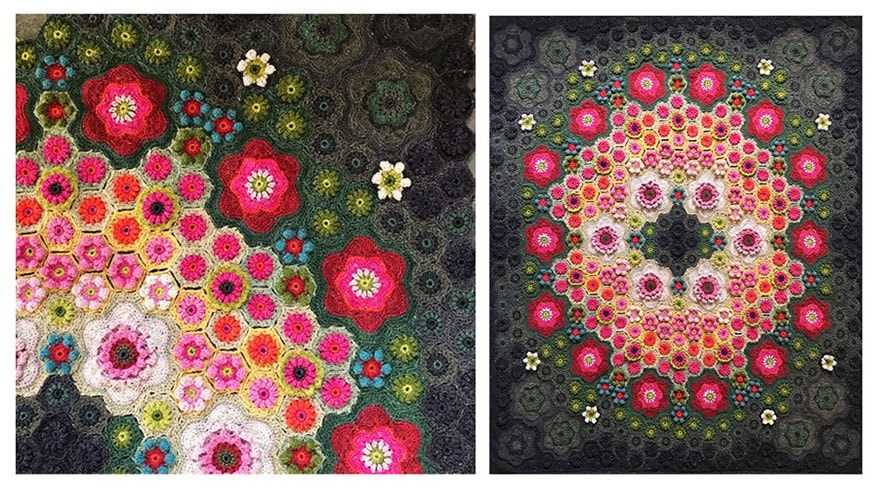 One year after this epic project began we displayed the fabulous finished blankets at The Norfolk Makers Festival in Norwich and for the first time I was able to view these blankets from a distance and could see them as  works of art – like the paintings that had originally inspired them.

Eventually I renamed the blanket WALLFLOWERS, a reference to how I think they deserve to be displayed and enjoyed, but I always refer to them as blankets. There’s something about this humble, almost self deprecating label that’s in direct opposition to, and rubs against, those grand old Dutch Masters. 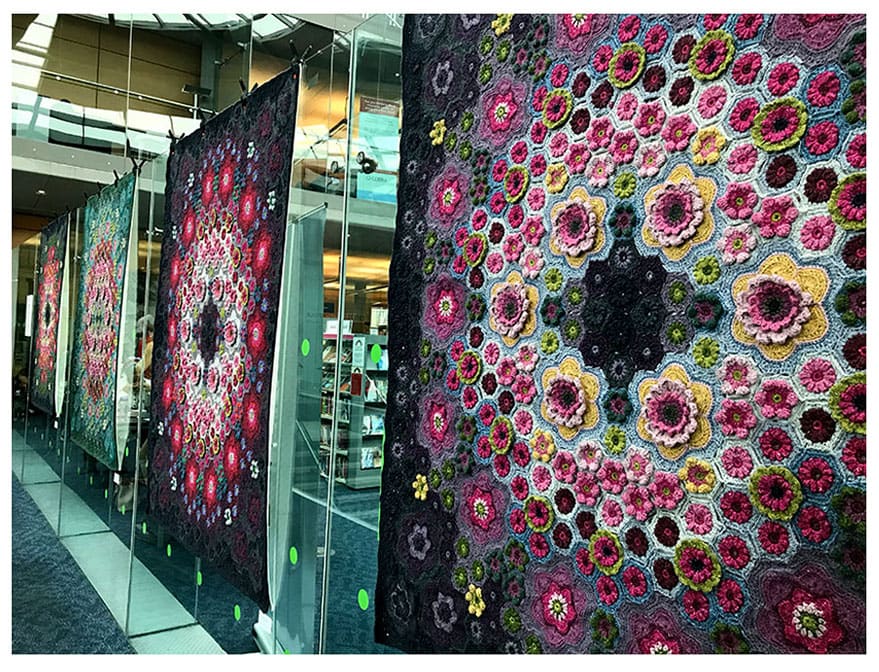 So that’s the story of Wallflowers and this October I’ll be relaunching this as an online course.

I think one of the most exciting aspects of this course is choosing your own, unique, colour palette. This is an integral part of the course and is covered in detail at the start. I won’t tell you what to use, or provide you with a list of required colours, I’ll give you a ‘formula’ for choosing your own colours and support and guide you through this process.

Everyone who’s made their own  Wallflowers blanket has spent a great deal of time thinking about and planning their colour choices and I don’t give out details of other people’s colours – that’s part of the process and what makes each blanket so unique.

But…….there’s no reason why you shouldn’t start thinking about colours now and this is the perfect excuse to buy yourself a huge bunch of flowers.

Working from images is helpful and a great way to start thinking about the colours you like – but you simply can’t beat working from real life if you really want to study colour and ensure your results are exciting, dramatic and innovative.

So here’s a suggestion;

Buy yourself, or persuade your partner, bestie, son, daughter, dog etc to buy you the biggest and most glorious bunch of flowers you’ve ever had in your life.

Order them online from one of your lovely local independent florists who will prepare them with love.

Like these from: The Wild Folk Florist in Norfolk

Smell them, gaze at them, touch them, enjoy them and photograph them with different coloured backgrounds.

Identify the most important colours in the arrangements. Look for groups of colours and record them in any way you can. Paint them, make a collage, work digitally – whatever works for you and helps you to generate some exciting groups of colours.

All flower photos are by The Wild Folk Florist

Could this be  the start of your next crochet love affair?